The impact of Covid-19 on the future globalisation After over a year of the pandemic, as all of its consequences on public health, on the economy, and all other results in society and politics are not even fully assessed and calculated, it seems appropriate to discuss what are its likely overall implications, particularly for the globalisation processes.

One cannot claim that globalisation has to be blamed for the uncontrollable spread of the disease around the globe, though it has undoubtedly contributed to the speed of its global expansion. The globalisation has actually evolved when technology-enabled and demanded it when the limitations to travel were reduced, and consequently, economic actors were able to serve the global markets. At the same time, it should be recognised that supporters of globalisation – reserving the right to be critical about some of its negative manifestations – seem to be much more numerous than its opponents. It is much more a question of how to globalise, than whether to do it at all.

Namely, as we have been experiencing it, globalisation has produced also several problems: from facilitating economic differentiation among the rich and the poor in the global community and enabling the hyper-powerful economic players to take advantage of all others, who could not get protection behind state borders. At the same time, deglobalisation would undoubtedly slow down economic growth – particularly in smaller economies -- affecting negatively all segments of society.

The pandemic has arrived when the world was facing a most complex set of challenges/crises accumulating over a long time. The virus has flooded on the surface already simmering with long-neglected problems (lack of attention to public health and elderly care, facing an exacerbating environmental crisis, tolerating huge inequalities, practically ignoring migration and refugees crisis), and facing as a consequence numerous humanitarian crises, technological and productivity slowdown, erosion of democracy, digital (dis)information and erosion of privacy, globalization backlash, economic nationalism and protectionism, trade wars - accompanied by tectonic changes in the world power structure. While the pandemic can be contained through vaccination – bringing us back to “normal” -- many of the above-mentioned long-term problems are of different nature, and cannot be fixed without radical changes in the world order in line with principles of sustainability.

These crises should thus not be regarded only as an economic or social phenomenon - or now as a health issue - but as a very complex, multidisciplinary problem and challenge. Hyper globalisation has clearly catapulted the political economy trilemma (trade-offs) between sovereignty1, globalisation, and democracy, while we are facing the inability to deal with all three at the same time. Therefore, reconstructing the global economy in a post-pandemic world cannot rely on old formulas, on totally free trade concepts, or economic nationalism, but should look for more mature and sustainable political economy responses.

The major characteristics of today’s global context can be summed up as:

The result of enhanced globalisation3, implies economic cycles to be synchronised in real time. Butterfly effects are almost simultaneous. The time lag between business cycles in one country spilling over to other economies has now almost disappeared. They became highly correlated among countries. Such cycle synchronization has been “increasing over time” (IMF, 2007). Substantial enhancement of global integration via global value chains (GVCs4) has made an additional contribution to such global integration and synchronization of business cycles. “What really makes this era of history fundamentally different from any other in modern history - and by that, we refer to the last few hundred years - is the importance of global issues: climate, terrorism, infectious disease, nonregulated cyberspace, proliferation, trade, and investment. The flows are so fundamental, and for better and for worse, that’s qualitatively different than what we’ve seen historically in terms of the number of issues and their power and importance” (Haass, 2020a).

In spite of such interdependence, we are facing a strong globalisation backlash and the rise of economic nationalism. Huge technological changes, although not so fundamental as during the Industrial Revolution, are paradoxically paralleled, with a productivity slowing down. Productivity gap between today’s developed countries (DCs) and LDCs is much greater than in earlier times, also contributing to increasing inequalities.

Globalisation has a Janus face5, ugly and nice at the same time (Eden et al. 2001). Its supporters argue that the benefits outweigh the drawbacks6, while critics want to, either improve the conditions of global trade or, in some cases, roll back the globalisation - GLO (for details see Josephson 2018). For some, GLO is like Tsunami sweeping the planet or like a snow avalanche. It cannot be stopped, but one can swim on the top of it, hoping to stay alive. In other words, the results depend on man-made policies. The pandemic is also, for some, a crisis that will cause a fundamental change on the global chess-board of economics and politics. For others, the basic principles of the international order are likely to remain much the same with some changing roles of the global players, the US and China. 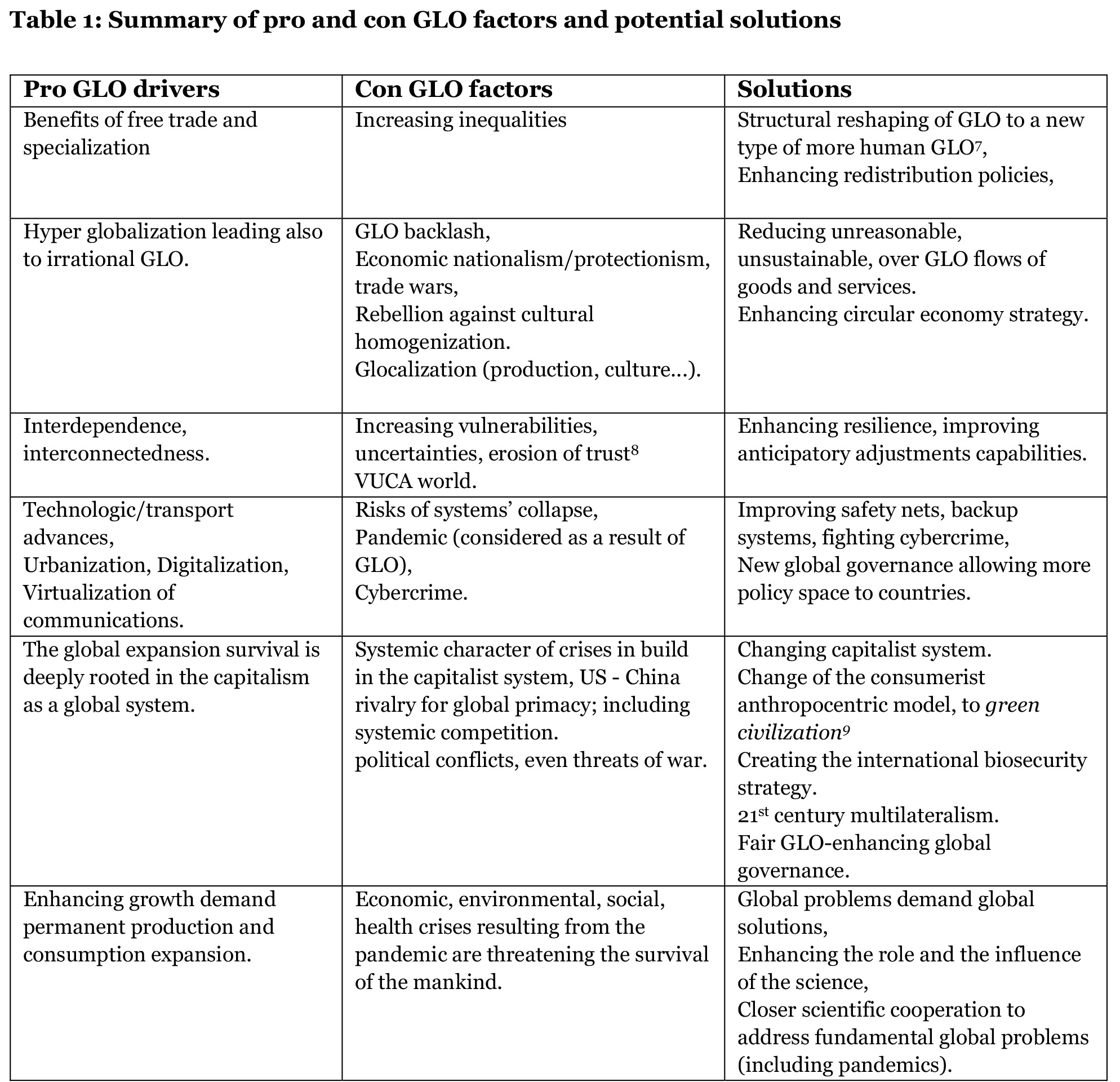 Globalise or de-globalise, this is the question!

The first threat is geopolitical and economic rebalancing between the US hegemony and a growing China. The tendencies so far have demonstrated more interest for regionalization of sourcing, not its nationalisation. Consequently, the impact on GLO may not be as huge as initially expected.

On the other hand, new major powers, China10, together with some other Asian countries, are becoming influential advocates of GLO and the existing world system11 from which they benefited so much12, while previous advocates of the modern GLO, Western countries seem to have changed their minds. The long-term issue is whether such a short-term slowing down, or even stopping of GLO, will last or will eventually be reversed?

What is the final result of such simultaneous drivers of the two different processes and of the co-existence of GLO and de-GLO tendencies? Currently, in practice, physical globalisation is receding, while digital globalisation and science cooperation is growing. The GLO as a global division of labour/specialisation is far from over. To throw the baby (GLO) away with the bathwater (virus), and to dream of a return to autarky, is no answer. Fully-fledged de-GLO would be inefficient and painful because, by getting rid of the advantages of the division of labour, everybody would lose.

The public should be objectively informed about the reality of globalisation, its challenges, as well as benefits. Lack of such authentic information could influence public attitudes unfavourably and could also have a negative impact on policies affecting globalisation processes.

Empirical evidence supports such views. Hillenbrand’s in-depth analysis based on the International Futures Model (2010, 1) demonstrated that: if GLO halts or recedes, the results will be profoundly negative for most countries13 and most income groups. While a retreat into protectionism may improve income equality in some countries, it will reduce incomes of both the poor and the rich, and poverty headcounts will be increased. In addition, political instability will rise in a majority of countries and the probability of interstate wars will increase. (…) The likelihood of state failure through an internal war, projected to diminish through 2035 with increasing GLO, rises in the de-GLO scenario, particularly among the non-OECD democracies. Similarly, de-GLO makes for more fractious relations among states and the probability for interstate wars rises (2010, 5).

The recent crisis has shown how neither science nor technology can succeed without GLO, since “… all of these trends/threats are global, in that they are common to all humanity, and can be lastingly reduced only by global cooperative action.” (Posen, 2020).

The major question related to our topic is whether we will have more or less GLO after the Corona pandemic. Probably we will have both coexisting at the same time. More GLO is to be expected in some sectors like flow of information, research cooperation, governance, virtualization of communications, coordination in health sector. On the other hand, we will see also de-GLO tendencies like slowing down of trade (maybe even less FDI), eliminating some unnecessary trade flows, bringing back home some manufacturing (reindustrialisation) by restructuring GVCs, “nationalization” of the production of health products, medicines (vaccine nationalism) - as part of enhanced economic nationalism. Nevertheless “the world of tomorrow is not likely to stop being globalized, interconnected and interdependent” (Morillas, 2020).

“The post-pandemic world is likely to need, and witness, even more GLO” (Contractor, 2021) of a different kind and in other areas (we can add). Yet, “this crisis will reshuffle the international power structure in ways we can only begin to imagine” (R. Haass, in Allen, 2020).

The coronavirus crisis is a kind of a stress test for governments and their ability to address such huge challenges. Their role has been and probably will be reinforced. Eroding welfare state in the 1980s has ended with its recent modernization. Ikenberry agrees with such a double-face impact of the pandemic, claiming that “given the economic damage and social collapse, the pandemic will, in the short term, give fuel to the nationalists and anti-globalists, the China hawks, stimulating great-power rivalry, strategic decoupling, and the like. But just like in the 1930s and ’40s, there might also be a slower-evolving counter current, a sort of hard-headed internationalism similar to the one that Roosevelt, and a few other statesmen, began to articulate before and during the war, an open post-war order required the building of a global infrastructure of multilateral cooperation” (see Ikenberry, 2020).

Here are some of the specific answers to our major questions:

The major lesson of the Coronavirus is “not that GLO failed, but that GLO is fragile, despite or even because of its benefits” (Farrell, 2020). What the pandemic has revealed is that the real problem is deeply systemic, and reflected in the kind of society we are living in.

(Article by: prof.dr.Marjan Svetličič, University of Ljubljana, with editorial adjustment from larger text to be published in Teorija in praksa, Ljubljana by B.Cizelj)

1 Or autonomy as elaborated by Rizman (2008).
2 Means in fact normlessness society, the breakdown of moral values, standards, or guidance for individuals to follow. It may evolve from conflict of belief systems and causes breakdown of social bonds between an individual and the community (both economic and primary socialization).
3 What really makes a difference to previous GLO eras is unprecedented mobility of everything; goods, services, capital people and all other related things like environmental damages, climate disasters.
4 They represent as much as 60% of global trade (UNCTAD, 2013). 5 Such ambivalence, or even dialectic phenomenon, producing divergent or even contrary effects is not only specific for the GLO but for the majority for social-economic phenomena.
6 But there was no convergence among countries as some optimist predicted as an effect of GLO although the inequlities among countries have eroded (China effect).
7 Based on the principle of humanity (Bauer, 2008).
8 Long lasting pandemic shock creates anxieties, people are afraid of each other (not to get infected), trust is lost.
9 The problem is whether it is possible to have green capitalism in the system where the profit maximization is the ultimate objective. 10 China already in 1980s embraced GLO as its strongest development tool.
11 80% or more of respondents in Vietnam, Philippines and India saw »GLO more as a force for good in the world«. Another 10 countries' respondents supported it by more than 60% (among them also some small DCs (Denmark, Sweden) and Germany. The position of French was on the other extreme, being almost balanced among supporters and opponents. In the US, GLO was seen as good by 40% of respondents.
12 They realized that “it doesn't matter whether a cat is white or black, as long as it catches mice?" (Deng Xiaoping).
13 The only winners are a small number of countries that were small and poor and not well integrated in the global economy. The gains from de-GLO are very small even for them (ibid, 2010, 14).