Wealth inequality in the world

An ethical challenge, source of political instability and economic stagnation Waiting for the traffic lights to open on Avenida Brasil in São Paulo, a very old lady came up to my car-window begging for some change. Nothing new in modern Brazil. But I was staggered by seeing that she looked so much like my mother. How could I feel so deeply shocked? The beggar, a social category, was now a person, and a close one, even though my mother had died years ago. If she had had a different appearance, I would just have pulled a few reais from my pocket and forgotten about it. Yet years later, I still remember it. The emotion I felt is understandable, what is not, is that we feel so indifferent to, for example, 3 million children under-five who die of hunger every year. How do we make statistics not only intellectually understandable, but able to move us to action? How do we generate the empathy necessary for humanity to survive? Is indifference in the face of scandal, so long as it is ‘a general phenomenon,’ inevitable?

Let me first of all insist that there is no economic reason for poverty. If we divide the 2020 world Gross Domestic Product (GDP), $85 trillion US dollars, by the population, 7.8 billion, we can see that what we produce in goods and services on this planet is equivalent to $3,600 dollars per month per four-member family. This number can be fine-tuned. We may resort to net national income instead of GDP or make other adjustments, but the basic fact remains: what we presently produce, with a very modest reduction of inequality, is sufficient for all humanity to have access to a comfortable and dignified life. Ours is not an economic problem, it is a question of political and social organization — what we presently call governance.

Families do not depend on income alone, the money earned every month or year. They also depend on accumulated wealth, such as a home, money in a bank account, a car or other assets. The numbers for 2020, published by Crédit Suisse, one of the key wealth managers in the world, represent the global wealth pyramid 2020 and they are simply incredible.2 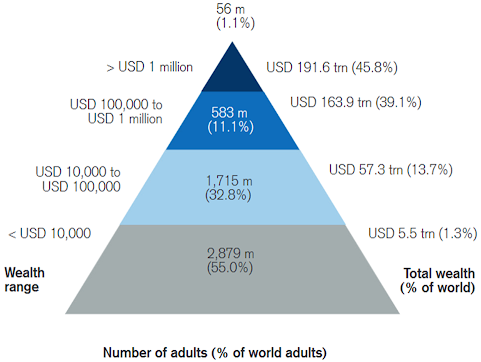 The real drama is at the bottom of the pyramid: 55% of the world adult population, almost three billion adults, have practically no wealth at all (under $10,00) and the total wealth of this population is $5.5 trillion dollars — 1.3% of the world total; as compared to $191.6 trillion dollars, or 45.8% of total wealth, held by the top 1.1%. This is 35 times more wealth for a 55 times smaller group. The average per capita wealth of these bottom 55% of adults is just $1,910 dollars. If we add the children, we are speaking about roughly 4.3 billion people. For the majority of the population, this system is simply not working.

The dramatic increase in inequality in the last decades is easy to understand, since roughly two thirds of the world population can barely make ends meet. This means that they have no means to invest in household wealth accumulation. On the other hand, people with a high income have a substantial surplus that allows them to buy their home and not pay rent, or to buy financial instruments that generate more income and accumulated wealth. This generates a snow-ball effect, in the sense that the richer you get, the faster you accumulate. Without efficient wealth distribution mechanisms, the world only gets more and more unbalanced.

Just as the world generates enough income every year to ensure a dignified life for everyone, wealth redistribution — with more effective inheritance tax and other wealth taxes — could bring comfort and stability to everyone on this planet. Paying better salaries would also allow more people to accumulate wealth. The total personal wealth of adults presented by the Crédit Suisse, as we see on the table below, is $418 trillion dollars, equivalent to practically $80,000 dollars of average wealth per adult. For a two-adult household, this represents $160,000 dollars. Not a fortune, but an immense change in the quality of life for the majority of the population, even with a modest redistribution. Taking just $5.5 trillion dollars from the $191.6 trillion dollars of the richest 1.1% would double the wealth at the bottom of the pyramid. 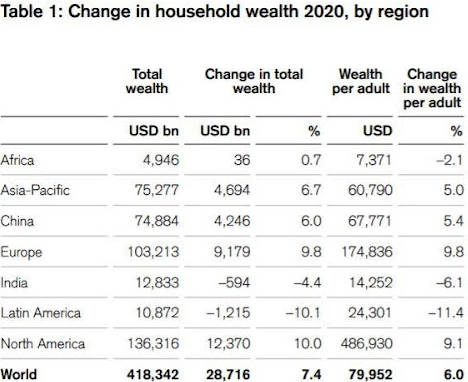 The Report also shows how dramatically unequal the planet is, in the geographical distribution of wealth: “The overall regional disparities are reflected in the fact that North America and Europe together account for 57% of total household wealth, but contain only 17% of the world adult population.” (p.11) We are not only facing the inheritance of so many colonial atrocities, but a renewed process of increasing inequality, basically through financial mechanisms.

From an ethical point of view, this is a scandal; for the poor are not responsible for the workings of the system that holds them in the poverty trap, and neither do the rich produce the wealth they accumulate. The basic form of accumulation of wealth has changed. A traditional producer of goods and services made profits by paying his workers less, but had to create jobs, produce useful things people would buy and pay taxes, which allowed public services and infrastructure to be provided. The system worked. The presently dominant system of social surplus extraction is based on financialization.

“In fact,” writes Ellen Brown, “we have two economies – the consumer/producer economy where goods and services are produced and traded, and the financialized economy where money chases “yields” without producing new goods and services. The financialized economy is essentially a parasite on the real economy and it now contains most of the money in the system. Corporate owners and investors can make more and faster money in the financialized economy than by investing in workers and equipment. Bankers, investors and other ‘savers’ put their money in stocks and bonds, hide it in offshore tax havens, send it abroad, or just keep it in cash.”3 Robert Reich sums it up: “The economy turned from making things to making financial instruments. Product entrepreneurs were replaced by financial entrepreneurs.”4

If we consider the productivity of money, a small increase when you lack everything is a huge difference in the quality of life, while reducing the fortunes of billionaires a little bit does not change much for them. More money at the bottom makes it more useful. But do they deserve it? John Kenneth Galbraith makes a good argument: “One of man’s oldest exercises in moral philosophy is the search for a superior moral justification for selfishness. It is an exercise which always involves a certain number of internal contradictions and even a few absurdities. The conspicuously wealthy turn up urging the character building value of privation for the poor.”4

This is not about ideology, it is about making the system work. The degree of inequality we reached is an ethical sham. From the social and political points of view, it generates chaos: at the limit of inequality, there is no space for democracy. And from the economic point of view it is simply counterproductive, since speculation is being rewarded above production and job generation, and money is naturally going to where it multiplies faster. It is not a question of good guys and bad guys, it is the system.