The Synthesis Report and the Paris Agreement The main goal of the Paris Agreement is to stabilize the increase in average temperature at 2°C and pursue efforts to limit the temperature increase to 1.5C above pre-industrial levels. The Synthesis Report published last September by the Secretariat of the United Nations Framework Convention on Climate Change (UNFCCC) reveals how far we are from achieving this goal. A goal that will be unattainable if, throughout this decade 2020—2030, very ambitious emission reductions are not made urgently.

On September 14th, myself and Olga Alcarez (both co-authors of all the articles we publish in WSI magazine) published the article 'Call for Mother Earth: an initiative to address climate emergency in Glasgow.' We will see in this article that, regarding the disastrous situation described in the cited Synthesis Report, the initiative Call for Mother Earth is today more necessary than ever. So here and now, we again ask for the adhesion of all of our readers.

Regarding the objective of the Paris Agreement

The goal of stabilizing the temperature increase of 1.5C does not spare us from continuing to suffer the adverse impacts of climate change, but it would serve to keep us within margins compatible with the viability of the life of the human species and most terrestrial ecosystems. The following figure, extracted from the latest report published by the IPCC1 shows us the temperature distributions throughout the planet that, according to climate models, would lead to an increase of 1.5C, 2C and 4C. The differences between the scenarios are so obvious that we think they do not deserve any comment. These differences highlight the importance of stabilizing the temperature increase as soon as possible and doing so at the lowest possible levels.

Thus, achieving the 1.5C increase limit is not ‘a whim,’ it is essential to guarantee the life of our youth and all of our descendants. This should be a top priority goal for any minimally responsible leader committed to the future of citizens. It is sad to say that, at the moment, our leaders are far from measuring up. The Synthesis Report prepared by the UNFCCC Secretariat leaves no room for doubt. 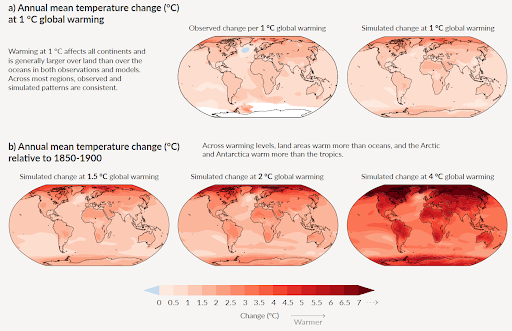 Source: IPCC, 2021: Summary for Policymakers. In: Climate Change 2021: The Physical Science Basis. Contribution of Working Group I to the Sixth Assessment Report of the Intergovernmental Panel on Climate Change.

About the Synthesis Report presented on September 17th 2021

The Nationally Determined Contributions (NDC) Synthesis Report presented on September 17th 2021 by the Secretariat of the UNFCCC is the dramatic ‘latest’ finding that the state commitments or NDC, currently officially presented within the Climate Convention, are insufficient to curb the current climate crisis. To be more precise, instead of slowing it down, they will make it worse.

This report, among other things, assesses the combined effect of the sum of emissions mitigation commitments presented by countries for the decade 2020—2030. The result is horrifying: in 2030, global emissions, far from decreasing, will still increase by 5% compared to 2019 levels, or by 16.3% compared to 2010 levels.

The following figure allows us to see to what extent the level of emissions in 2030 (marked in red) moves us away from the emission reduction scenarios compatible with the temperature goals of 1.5C and 2C (blue and green bands). 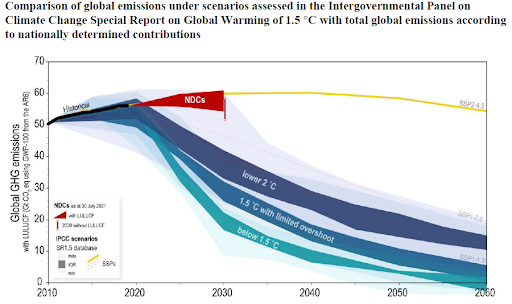 In fact, the science collected in the last two reports by the IPCC tells us that, in order to stabilize the temperature increase by 1.5C, the CO2 emissions in 2030 should be reduced by 45% compared to 2010 levels. This 45% reduction should be, so to speak, the north — the reference — in the fight against climate change during this decade. It should be noted that according to the Synthesis Report, emissions in 2030 will increase by 16.3% compared to those of 2010. To be clear, we are going in the opposite direction to the one we should be following. There are no words!

Another indicator included in the Synthesis Report, that corroborates what has been said so far, is the cumulative CO2 emissions that the current NDCs imply for the 2020—2030 period. According to the Report, this cumulative total is 445 CO2 gigatons. This amount can be compared to the so-called Global Carbon Budget (GCB) of 1.5C. The GCB concept is explained in one of our previous articles The fight against climate change. Very briefly, the GCB is the amount of CO2 that leads to a specific temperature increase. According to the latest data published by the IPCC1, the GCB compatible with the global warming of 1.5C is, at the moment, 400 Gt of CO2. This means that, by 2030, we will have already exhausted this budget, and therefore by 2030, the 1.5C goal will have already been exceeded.

The disastrous results of the report are a reality check that should now mobilize civil society, world citizens, the media, etc to demand their leaders abandon attitudes of posture with environmental overtones, be more serious and act. This climate action must bring to the table policies that promote the unavoidable drastic and urgent measures that allow, in 2030, the reduction of global emissions by 45% compared to 2010. These measures should be implemented from today.

The Achilles’ heel of the Paris Agreement

Given the description so far, perhaps a reader is asking: what is the use of the Paris Agreement? The answer is that the agreement has flaws that should be thoroughly corrected; the sooner the better. As we mentioned at the beginning, the Paris Agreement sets its goal in article 2.1 in the following terms:

Although during the negotiations that led to its approval, all kinds of alternatives were proposed, the unforgivable flaws of the agreement, the Achilles’ heel are:

In this context, the Agreement’s goal is revealed as an authentic pie in the sky. As long as states can continue to prepare their NDCs, without any framework to seriously guide them in the direction of the emissions reductions they should make to achieve the temperature stabilization goal, the agreement will not be at the service or up to the task required by the current climate emergency. Consequently, the result of its implementation can be any barbarity, as evidenced in this report of the 17th September 2021. Hence, without any profound change, the Paris Agreement leads us to the most resounding failure.

Now what? Can the Glasgow summit serve to redirect this situation?

In light of such a discouraging scenario, the questions are: Is everything lost? Is there any approach that allows redirecting the disastrous results collected in the Synthesis Report? Well, there is! The world is always full of hopeful initiatives. And it must be this way because, in our modest opinion, during the present decade the whole of humanity has so much on the line that no one can afford to even think about giving up.

One of the action initiatives is the proposal 'Call for Mother Earth' that we presented in our last article. This is revealed as a possible way to ensure that COP26 could serve to redirect the current situation. We are happy to announce that the call has already started to bear fruit, among other things, because today there is already an agenda item of COP26, namely number 16, entitled ‘Equitable, fair, ambitious and urgent real emission reductions now consistent with a trajectory to reduce the temperature below 1.5C.’ Now is the time for this item, introduced by Bolivia, to receive the maximum possible support. Thus, we end this article in the same way as our previous one, asking for the adhesion of all our readers.

Call for Mother Earth wants to be a platform open to people aware that humanity is part of the planet’s ecosystems. We rely on the ecosystems, and we should preserve them for future generations as we have received them, or even better. It appeals to all those concerned about climate change and the future of humanity, for the future of young generations, children, and those who are yet to be born. People who are committed to justice, peace, and solidarity in the world. The platform ‘Call for Mother Earth’ aims to bring together the voice of all these people, make their commitment to Mother Earth visible, and project their strength so that COP26 can answer the critical question: by how much should every country reduce their emissions before 2030 for an overall reduction of 45% compared to 2010 levels? Josep Xercavins Valls
Josep Xercavins i Valls was born in Rubí on 1 February 1956, and now lives, recently retired, in Barcelona. He gained his Doctorate in Sciences at the UPC (Polytechnic University of Catalonia) in 1999 and his degree in Physics from the UAB (Autonomous University of Barcelona) in 1979.
Author profile