Not all viruses are harmful

Perhaps you will find nobody in the world who does not know about viruses especially after this deadly pandemic outbreak of Coronavirus disease (Covid). Currently, the most talked about global issue is this viral disease and the most cited single word probably is this notorious “virus”. The impact and influence of viruses are so widespread in our society that the word “viral” has already been coined in everyday conversation to mean something rapidly circulating which is unstoppable or uncontrollable. Viruses are very tiny invisible organisms that are usually detrimental and cause diseases in plants and animals, including humans. Viruses are mostly known for their aggressive and infectious nature. Most viruses have a pathogenic relationship with their hosts – meaning they cause diseases ranging from mild cold to serious conditions like severe acute respiratory syndrome (SARS) or Covid or even AIDS. But the interesting thing is, not all viruses are harmful! Some viruses are extremely beneficial for plants and animals. Bacteria, on the other hand, are another very well-known ultra-microscopic organism that also causes numerous diseases but most of them are extremely beneficial for mankind.

You will be surprised to know that bacteria are ubiquitous in nature! They are literally everywhere! They are in the dirt, water, air, dust, surfaces, your skin, your stomach and anywhere you can think about. Humans are a unique reservoir of a variety of microorganisms, over 100-1000 species, which primarily modulate the host’s internal environment and thereby, play a major role in the host’s health. These microbes have tremendous potential to impact our physiology, both in health and in disease. They contribute metabolic functions, protect against pathogens, boost the immune system, and, through these basic functions, affect directly or indirectly most of our physiologic functions. But still this is a great question of whether probiotics can really improve our health! Everyone has been talking about their gut bacteria and scientists are getting more and more concerned about the actual role of these internally colonized inhabitants.

Probiotics are live microorganisms added to foods that offer potential health benefits to the host when consumed in adequate amounts. The range of food products containing probiotics is very wide and constantly expanding. The main products in the market are dairy-based ones including fermented milk, cheese, ice creams, buttermilk, yogurts and powder milk. Of them, yogurts account for the largest share of sales. Dietary probiotic supplementation generally involves dairy products, but probiotics can also be incorporated into non-dairy fermented food products, presenting an alternative and more advantageous source. Nondairy items include soy-based products, nutrition bars, cereals and a variety of juices as appropriate means of probiotic supplies to the consumer.

If we look at the history of probiotics, it will be surprising that the knowledge of the beneficial effects of lactic acid fermentation on human health dates back to several hundred years. Sour milk has been mentioned several times in the Bible. Ancient Romans and Greeks knew various recipes for fermented milk. In ancient Egypt, people consumed a specific type of sour milk, called “leben raib”, prepared from buffalo, cow, or goat milk. A similar “jahurt” was also commonly consumed by people inhabiting the Balkans. In India and in Turkey, fermented milk drinks were known already 800–300 years B.C., and in the 8th century, respectively. A milk drink called “ajran” was consumed in Central Russia in the 12th century, and “tarho” was consumed in Hungary in the 14th century. The beneficial role of some bacteria inside human body was first investigated by Metchnikoff in the early 1900s and was suggested that these beneficial bacteria could be administered with a view to replacing harmful microbes with useful ones. The term probiotic, meaning “for life”, was first coined in the 1960s by Lilly and Stillwell. 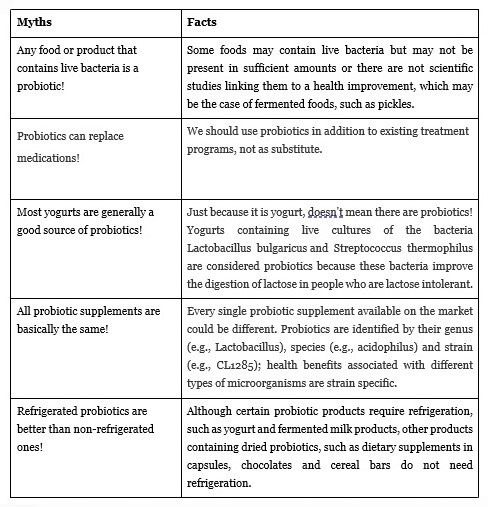 Immunity is built through exposure. If we have never been exposed to any invaders or pathogens, our immune system cannot recognize the invaders and will never know how to respond to the appropriate enemies. Research has shown that probiotics are beneficial in strengthening the immune system by interacting with the gut or existing microflora. Probiotics have been shown to increase immune responses to specific antigens, or foreign invaders. In fact, your body is getting trained to fight what and when it needs to. Probiotics are known to produce organic acids especially short chain fatty acids (SCFA) in the intestine such as acetic, propionic, butyric and lactic acids. These acids effectively lower the pH and produce lethal or growth preventing effects against pathogens. Many pathogenic bacteria are sensitive to acid and die in response to the intolerable environment. It’s also known that many pathogens invade the intestine by entering through tight junctions in the intestinal wall. Research has shown that probiotic bacteria may help close these junctions or gaps and prevent invasion.

Research has shown that an imbalance in the gut microbiota plays an important pathophysiological role in the positive regulation of irritable bowel syndrome (IBD). It is also understood that the disorder could possibly be altered by supplementation with probiotics, prebiotics, and synbiotics. IBD is being associated with impaired production of short chain fatty acids (SCFAs), particularly, acetate, butyrate, and propionate. Moreover, these SCFAs have been known to play a key role in maintaining the normal homeostasis of the colon. They also possess anti-inflammatory effects and improve propulsive colonic activities. Therefore, supplementation with indigestible carbohydrates and fiber alone, or in combination with probiotics to increase the production of SCFAs could be useful in preventing inflammation.

Allergy is a big medical issue nowadays. Allergies are a medical concern when they interrupt your overall health and wellness. The interest in probiotic therapeutic potential in allergic disorders stemmed from the fact that they have been shown to reduce inflammatory cytokines and improve intestinal permeability in vitro. Several studies have demonstrated the outstanding efficacy of probiotics in many allergic conditions, such as eczema, allergic rhinitis, asthma and food allergies. In vitro studies of certain probiotics, such as Lactobacillus plantarum L67, have shown the potential to prevent allergy-associated disorders with the production of interleukin-12 and interferon-g in their host. In another study, L. plantarum 06CC2 significantly alleviated allergic symptoms and reduced the levels of total immunoglobulin E, ovalbumin-specific immunoglobulin E, and histamine in the sera of ovalbumin-sensitized mice.

As mentioned earlier that probiotics are the "good" bacteria — or live cultures — like those naturally found in your gut. These active cultures help change or repopulate intestinal bacteria to balance gut flora. This functional component may boost immunity and overall health. On the other hand, prebiotics are naturally occurring, non-digestible food components that are linked to promoting the growth of helpful bacteria in your gut. Simply, they are "good bacteria” promoters. Ultimately, probiotics, the "good" bacteria and prebiotics, or "good" bacteria promoters, work together synergistically. In other words, prebiotics are breakfast, lunch and dinner for probiotics, which restores and can improve digestive health. Products that combine these together are called symbiotics.

Probiotics possess important functional attributes that could fulfill most of our basic nutritional and clinical supplementation requirements. There is evidence that several strains of probiotic work as intended, but some studies show that other strains don’t perform any better than placebo in clinical trials. The label should say what you should be using the probiotic for. The lack of clarity on the label hasn’t stopped consumers from using probiotics. It’s challenging for consumers to know which probiotic they should buy. The Food and Drug Administration (FDA) classifies most probiotics as supplements, which means it is left up to the manufacturer to ensure the probiotic is safe and labeled truthfully. The FDA does not regulate supplements with the same level of scrutiny as medications.