Will my smartphone R.I.P.?

A smartphone’s voyage in the afterlife The Internet is a material world, not just a virtual reality. Worldwide, we have 3.5 billion smartphones1. The Internet of Things (IoT) connects more objects to the Internet than human beings. We humans now use about 34 billion digital devices1—including desktop computers, tablets, smartphones, smart TVs, smart appliances, video game consoles, computers in cars, telecommunications network devices, and data center servers. The telecom industry predicts we will have 50 billion IoT-connected objects2 within a few years. 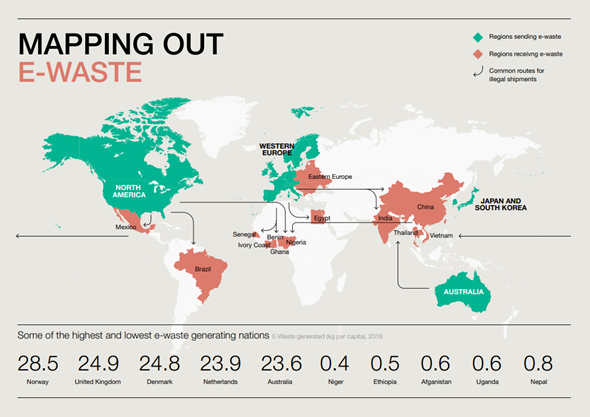 © World Economic Forum. In: WEF (2019), A new circular vision for electronics: time for a global reboot

Even though many countries now regulate e-waste, children and adults needing money often handle it without protection. While they comb dumpsites and burn cables to access sellable copper, they may inhale extremely toxic cadmium, chromium and brominated flame retardants. These are only a few of e-waste’s multiple hazards reported by the United Nations Environmental Programme (UNEP)4.

Near e-waste landfills, researchers find traces of cadmium throughout plant and animal food chains. High levels of lead—a powerful neurotoxin—have been found in the blood of children who live nearby. The UNEP report indicates that 80% of children living near an e-waste landfill in China have respiratory ailments. It reports increased leukemia cases, and high incidences of skin problems, headaches, dizziness, nausea, gastritis and gastric ulcers.

Green IT France report that the average French family owns 34 digital devices. Friends of the Earth France6 tell us that we each annually generate twenty kilograms (44 pounds) of electric and electronic waste. Yet, even in the most developed countries, e-waste collection and recycling rates9 are very low. Planned obsolescence, an industrial scandal tolerated for nearly a century, produces dizzying amounts of electronic waste. According to the UNEP, e-waste increased by 20% between 2014 and 2017.

My focus today is about waste at the product’s end-of-life. However, as highlighted by Dr Josh Lepawsky,3 the vast majority of all our waste (97%) is generated during manufacturing, not by what we discard. Recycling also produces its own waste and toxic emissions and is very energy-intensive; but again, most waste generated by electronics occurs during extraction and refining, manufacturing of components, assembling devices, packaging and transporting raw materials and end products—before we turn a device on for the first time. When looking at the energy used to produce a smartphone, Lepawsky reports that recycled materials barely, if at all, reduce the energy bill. Recycling does not significantly reduce the global amounts of waste, pollution, greenhouse gas emissions or energy used. However, it can help reduce e-waste growth in landfills, toxic emissions, and extraction of non-renewable resources.

Try to picture the amount of waste annually produced only by small electronics like smartphones, laptops, tablets, printers and GPS devices. According to a UN report8, in 2019 we discarded 4.7 million tons of small electronics’ waste. Imagine: the Eiffel Tower weighs more than ten thousand tons. If you mentally build a row of 20 Eiffel Towers, then place 20 of these rows side by side to build a forest of 400, you’ll have a picture of the mass of annual global waste for small electronic equipment. If we include large equipment, our annual e-waste would weigh the equivalent of 4,500 Eiffel Towers.

The UN’s report previous 2017 version also tells us that our smartphones—barely 90 grams each, on average—generated 473,000 tons of e-waste in 2020 (47 Eiffel Towers). However, weight says nothing about the toxicity of e-waste.

The challenges of recycling

Over 90 elements in the universe are metals. Since the 1980s, the number of metals in electronic devices has increased from ten to around fifty. Thirty rare metals (seventeen of them are called rare earths), each with unique mechanical, chemical or electrical properties, make our devices small, light and efficient. Some rare earths require extracting 1250 tonnes of raw ore to obtain one kilogram of metal.5

Researchers continue to work on lowering the energy use, toxic and radioactive waste and monetary costs of recycling rare earths.12 A 2016 European study13 on recycling magnets containing rare earths shows the possibility of recycling becoming profitable. However, much more research is required. In 2019, a program funded by the European Commission (REE4EU) claimed to have created a profitable process for recycling magnets and NiMH-type batteries. Yet, the programme focuses on just one aspect of recycling—separation of metals—without accounting for either disassembly of end-of-life devices, or the small concentration of rare earths in the waste. The future economic viability of rare earth recycling remains rife with uncertainties.

If sustainability depends on keeping supply chains local, in the digital world, keeping local is not possible. During a device’s production and recycling or landfilling, materials are constantly shipped between countries and continents. E-waste’s environmental impacts are beyond control of municipal, regional, national or even international governments. Meanwhile, landfill authorities typically aim for local profit with little concern for harm to nearby people and ecosystems. The scale of public health and ecological disasters around these sites calls for seriously questioning and reducing our dependence on extracted metals.

A new generation of e-waste?

How will e-waste grow in the 5G era? With colossal amounts of hardware needed, 5G will only worsen, significantly, e-waste’s already catastrophic situations. Globally, the association of mobile operators estimates that 5G will require 14.1 million conventional antenna sites. Producing and landfilling billions of high-tech components from 5G smartphones and Internet-of-Things devices will widen gaps between the few people who can afford these products and the human, plant and animal communities whose environments are already unbearably toxic. Fast adoption of 5G smartphones might add a few more Eiffel Towers of lightly scratched 4G smartphones to e-waste graveyards. By 2025, as backup power to energy-guzzling 5G cell towers, we can expect an additional million tons10 (100 Eiffel Towers) of lithium batteries.

One obvious solution is to make use of the devices and infrastructures we already have. Users should wait several years before buying new hardware. Providers need to make full use of 4G mobile networks. Every one of us needs to take political action to prevent their congestion. Policy makers, engineers and consumers must insist on modular devices with easily repairable, replaceable parts. Dr Josh Lepawsky suggests challenging electronics engineers to design components using recyclable materials. He reports on the essential role of unambiguous laws and policies to facilitate a fair trade of e-waste and to allow re-assembly of hardware components in markets with a strong demand in second-hand and refurbished devices. The EU Parliament has proposed granting consumers the “right to repair” with extended product guarantees, availability of spare parts and clear labelling of a product’s expected lifespan. To extend the life of products, we can take good care of mobile devices, bring them to a local repair workshop when damaged, and buy refurbished or used devices. Last but not least, Lepawsky reminds us that degrowth—reducing production and consumption—is the best way to reduce our e-waste and landfilling or recycling.

Let’s remember: we don’t have to deploy 5G throughout public spaces. We could limit it to small-scale private networks within large factories, 5G’s true beneficiaries. Let’s not throw ourselves into a new era of digital waste benefitting only a few wealthy people at extreme ecological and financial costs to the whole world. If we’re truly committed to sustainable practices, let’s include telecommunications. Let’s gather political courage to recognize and deny the massive volumes of e-waste that would follow unnecessary 5G public deployments.

Fast-growing volumes of e-waste have become a huge ecological challenge. Recycling alone will not solve our e-waste problems. We’ll need to promote sustainable design and avoid deploying new public infrastructures such as 5G. Let’s extend the life of our personal devices, claim our right to repair—and opt for making full use of existing network infrastructures. To reduce e-waste significantly, we’ll need to consistently and steadily reduce our production and consumption of electronic devices. Happiness: universal function
Happiness makes free to conform only to himself and not to others