Nobody knows how much a society should spend on health care

The functional or professional rationality as exemplified in health targets and a legal framework is often at odds with the political rationality – the result being “piecemeal social engineering” (Popper) or muddling through with a step-by-step approach to economic policy (Lindblom, Tinbergen). A functional approach is to be seen in chart 1. It shows the allocation of resources in health care from a macroeconomic perspective “top-down” and a microeconomic perspective “bottom-up”.

1. The functional rationality or the optimal allocation of scarce resources

The objective of the use of scarce resources is either to conserve, promote or regenerate health as to be seen in the upper part of the chart. The lower part deals with the reduction of (widespread) diseases including individual health care and health promotion. The individual perspective shown on the bottom of the graph is orientated according to the international code of diseases, e.g. cardiovascular diseases, injuries or malignant growth.

There are always trade-offs between health care spending and alternatives such as education, science and research, defense, development assistance, mass transit and transportation, environment, climate protection, old-age incomes and care, or family policy and child care. Often these alternatives have themselves a strong influence on the health status of the population, e.g. education. Thus from an epidemiological point of view, avoidable morbidity and avoidable mortality are the ultimate goals and health care is one of the major instruments.

Within the health sector in chart 1 starts on the left side with prevention and health promotion, medical treatment of patients with acute and chronic diseases and healthy persons. Included are pharmaceuticals, remedies and medical appliances. Rehabilitation, nursing care, psychosocial and palliative care, dental treatment and last but not least sick pay are the areas where the resources respectively health expenditures flow to. 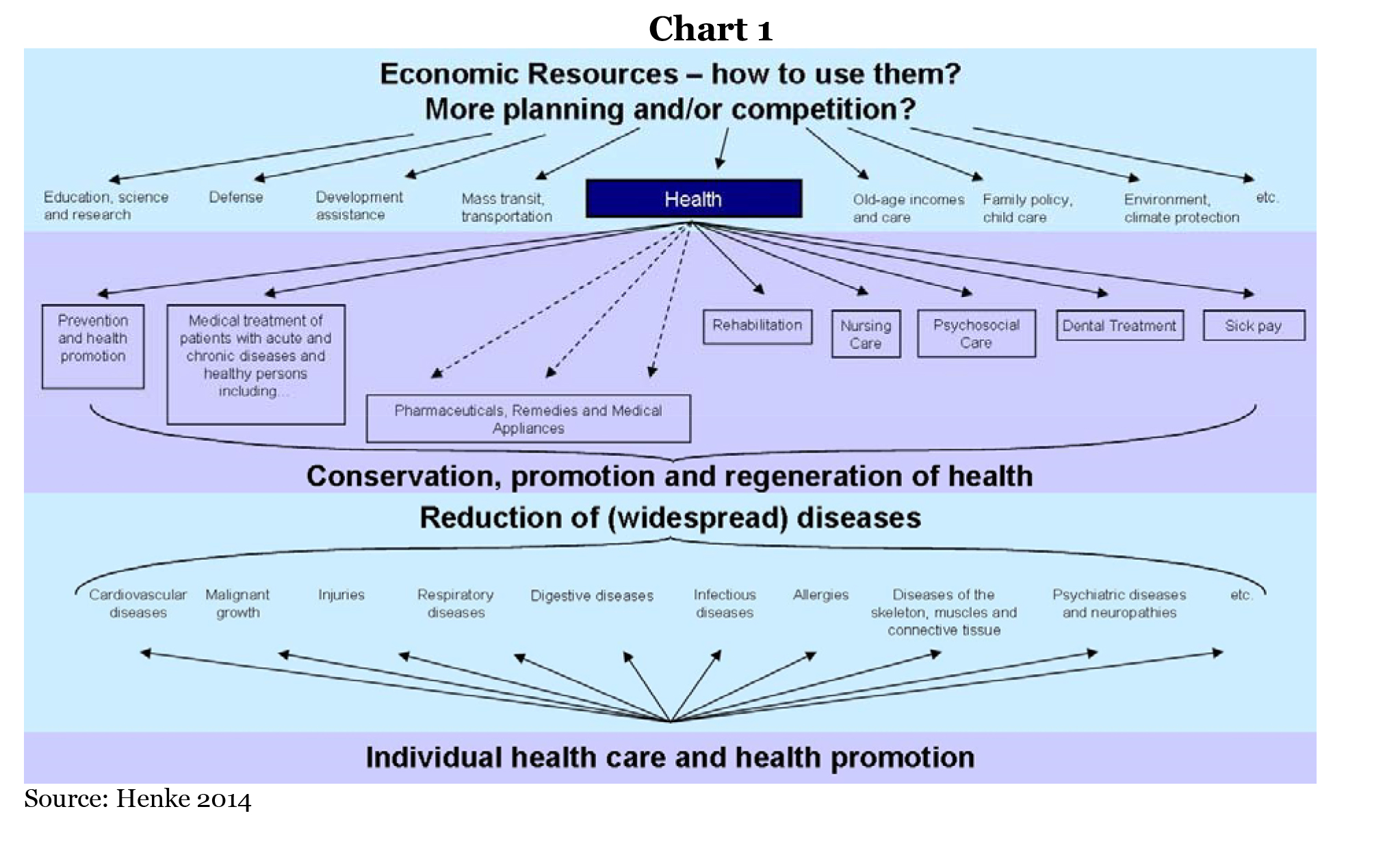 Nobody knows how much a society should spend on health care. There exists no optimal quota of health care expenditures neither in relation to GNP nor according to different sectors or per person. There is so far no empirical evidence for the optimal amount of money spent to achieve the goals mentioned. All the economists can tell us is that money should be spent in areas where the benefit to health is greatest or to put it more scientifically: The expenditure flows are to be reallocated as long as the marginal benefit or the health results per unit of cost in all sectors is the same. Or the other way round: Expenditures should be reduced where the marginal benefit to people is the smallest resp. inefficiency is the highest (See in more detail Porter, M. E., Teisberg, E.O., Redefining Health Care – Creating Value-Based Competition on Results, Boston 2006, 397-411).

Allocation decisions have to be made either by parliament, self-governing bodies, through market mechanisms or through a combination of the three of them on different levels. In an ideal world, a functional approach starts on the basis of the legal background with clear targets for health improvements, with process and system targets. Then, the next step would be the development of strategies for the implementation of these targets on a national, regional or local level by funds in a statutory health insurance system or with the commissioners on a regional basis e.g. in the UK. Thus the question arises whether there is an optimal mixture of the different instruments for accomplishing the targets on the different levels.

From a health economic point of view, the mixture involves the question about the mode of allocation. Can the target best be attained by using central planning, self Government in social insurances or market mechanisms? In case such a package or mixture of instruments exists or can be developed one may ask whether there is at all an institution that will bear the responsibilities for accomplishing the targets. In case it is a model of socially bounded resp. regulated competition the results stem from the innovation process by itself. And in the case of networking models, there is a clear legal framework the prerequisite for success. As the system of allocating resources to health in a society is too complex these processes take place and in real life only in a step-by-step approach that in many countries includes more and more monitoring and evaluation procedures.

Finally management resp. administrative efficiency is part of the specific program efficiency in the sector dealt with. In this context, more and more actors recognize that networks are superior compared to hierarchies or silos. (Henke, K.-D. “How to improve the rationality of health policy”, in: Kaal, W.A., Schmidt, M und A. Schwartze, Hrsg., Festschrift zu Ehren von Christian Kirchner, Tübingen 2014, S.837-848).

2. The political rationality or health policy as the art of feasibility

Health policy as a one-stop, unified whole is the dream of scientists, but hardly viable in a parliamentary democracy with proportional representation. Translating Herbert Giersch's definition of rational economic policy to healthcare reforms, rational health policy would have to be "aimed systematically at the realisation of a target system which is comprehensive, sophisticated and well-balanced", as well as "achieving the highest possible degree of success in the given circumstances". (Giersch, H., Allgemeine Wirtschaftspolitik, Wiesbaden 1961, p. 22). According to this definition, the current state of healthcare policy reform would be rational provided that all viable possibilities for improvement really have been exhausted health policy would then appear as the art of feasibility or, as Popper termed it, "piecemeal social engineering". The smallest common denominator is thus the foundation of the reform. One may choose to call the expected result an idle compromise, a settlement or even just an interim solution. In any case, the expected result of the political wrangle about the essential elements of the reform can be termed a lesson in the "art of feasibility". Thus again Popper, Giersch and Williamson have given the answer to the question of this article.