Energy policies in the hyperconnected era If we meet 2030 objectives to reduce CO2 emissions when producing electricity, ICT could still emit almost as much as aviation pre-Covid

In order to sustain itself and thrive, the mobile industry needs new markets1. Promoting 5G, the fifth generation of wireless technology, is one current focus for development.

Are these claims true? Before we deploy 5G, don’t we need to evaluate its environmental footprint and sustainability with due diligence?

During this time of limited resources, what’s necessary?

Even mobile operators admit that 5G will not change anything in consumers’ daily lives.3 Customer surveys and analysts4 have demonstrated that 4G can provide for all current and foreseeable uses.

5G will not solve “white spots” either, those areas where signals are poor or non-existent. (Anyway, we should preserve white spots to shelter wildlife, children and people whose health deteriorates from exposure to electromagnetic radiation transmitted by mobile infrastructure).

Last but not least, claims that 5G will reduce carbon emissions is a myth that completely contradicts unprecedented predictions in energy usage compared to past generations.

Energy to feed the digital world

The digital information-communication-technologies (ICT) industry already emits three percent of global greenhouse gases (GHGs), making its footprint much higher than aviation’s two percent of global GHG emissions. The figure below shows Huawei consultant Anders Andrae’s estimates of the digital world’s current electricity consumption5. From left to right, it shows consumption for networks, user devices and data centres. Each bar has two parts: the lower part shows the sector’s embodied energy (consumed to manufacture the device or the infrastructure equipment). The upper part shows how much energy devices and infrastructure consume during operation. 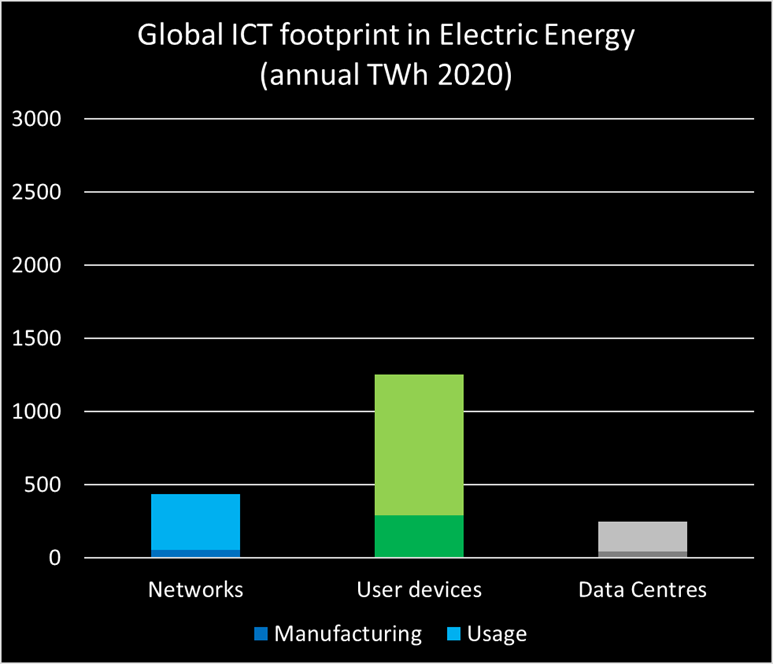 Networks (in blue) comprise 4G and emerging 5G networks: they already consume substantial amounts of energy. The largest part of today’s energy use goes to operating user devices (in green). However, complex user devices such as smartphones and laptops consume eighty percent of their lifetime energy use before they are switched on for the first time. The graph averages energy use for all devices, including less complex ones such as TVs or printers. Data centres (in grey) are surprisingly ICT’s smallest energy consumers. Still, over 200 terawatt-hours (TWh) of electricity is no small sneeze. It’s enough to power over twenty million households in developed countries. The ICT industry’s current total energy use could power over 200 million households in developed countries.

The rebound effect of 5G

The industry claims that 5G will reduce energy consumption. But actually, it will provide a perfect example of the Jevons Paradox, also called “the rebound effect:” increased efficiency actually increases energy use. Because of 5G, the mobile industry expects an explosion in mobile data traffic (and production of new devices and infrastructure) at a scale far beyond any improvements that energy efficiency can claim. 5G’s clear improvements in energy efficiency will therefore fail to reduce overall global energy consumption. 5G will add to global energy use.

The graph below shows Andrae’s forecast of all networks’ electricity consumption for the coming decade. Mobile networks would become the #1-energy guzzler, using more energy than wired and Wi-Fi networks. 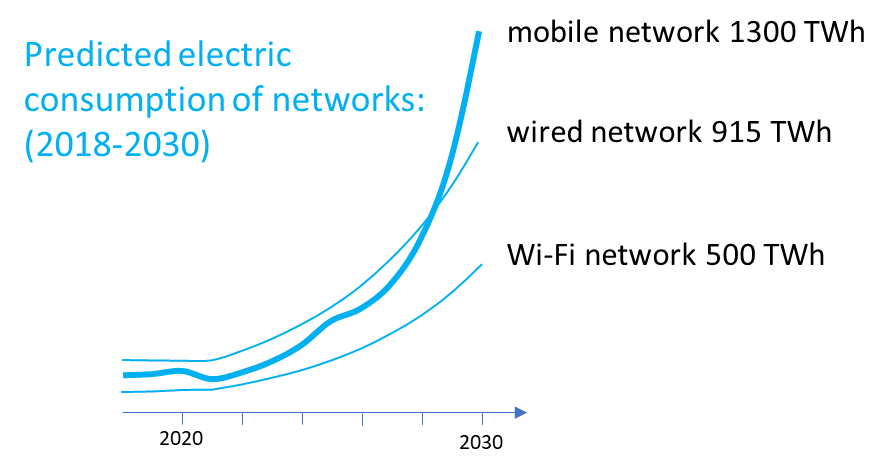 The mobile operators’ association (GSMA) already predicts that “5G-era networks will be much more efficient on a per-bit basis. However, they are set to carry many more bits over more cell sites powered by energy-hungry Massive MIMO antennas, so 5G-era operators could face up to 2-3 times higher energy costs versus 4G”.6

Besides the electricity usage of 5G and data centres, extracting and refining ores and manufacturing solvents and circuit boards for billions of energy-efficient devices and infrastructure parts…takes lots of embodied energy. Yet, embodied energy is almost invisible on the lower part of the 2030 bars, compared to 5G-era electric consumption!

What consumes all of this electricity? Videos and virtual reality eat like growing teenagers. The pie chart shows what video streaming consumes on existing 4G networks7. 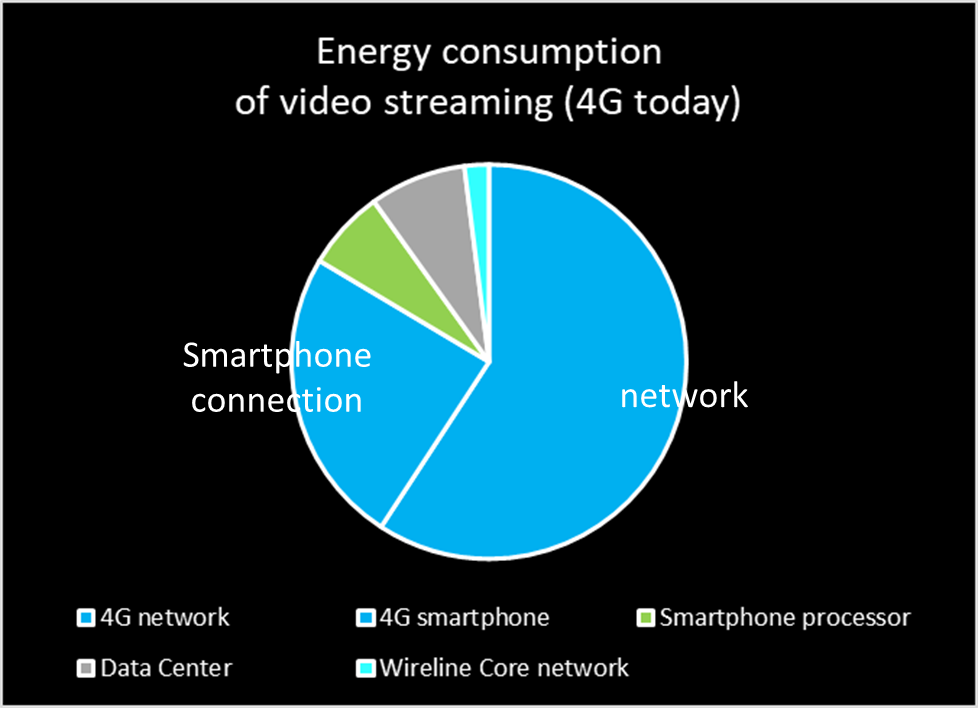 Data centres (grey) consume significant amounts of energy. If we go clockwise, the tiny light blue stripe shows the international wired Internet. It is quite insignificant compared to data centres. The dark blue section, the 4G network, accounts for the pie’s biggest piece. This energy is eaten once video data reaches the cell phone mast nearest you when electromagnetic waves carry the data through the air (wirelessly) to your mobile phone. A smartphone’s 4G connection also consumes a lot of energy just to receive data. Finally, the green area shows the energy that your mobile phone uses to process a video’s data.

5G from cradle to grave

Let’s look at what 5G will consume from its cradle to its grave—from its manufacture and usage to its end-of-life. Let’s start with the manufacturing of smartphones. It is very hard to calculate how much energy and extractions are required to manufacture billions of smartphones that embed new 5G-connected chips.

Then, there’s the Internet of Things. The 5G industry aims to connect billions of devices that will also require manufacturing: your smartphone can receive messages (from your chipped refrigerator filled with chipped orange juice) about what you need to purchase at the grocery store. The mobile networks themselves will need millions of new antennas and heavy batteries as backup power. Data centres will need to be enlarged. Operating 5G networks will be among the biggest energy comsumers in the equation. From Anders Andrae’s predictions about 2030 energy usage, let’s figure how many power plants we’ll need to power mobile networks. While the 2-reactor plant could power two to eight million Western European households today, 5G-era mobile networks around the world could require 38 such nuclear plants8. The energy consumption of these 5G networks is in addition to existing mobile networks’ energy consumption.

If you do not like nuclear reactors, we could use 18,000 260-meter high wind turbines9, each almost the size of the Eiffel tower. (Of course, industrial wind turbines provide only intermittent power, so we’d also need backup electricity from natural gas, coal, hydro or nuclear power; and manufacturing these turbines will require lots of neodymium; and operating these turbines will require oil at the gear shaft…).

These figures do not account for manufacturing or using data centres or our individual devices. They do not account for the e-waste generated by 5G infrastructure. Already, each year, we throw away enough smartphones (and the precious metals, lithium-ion batteries and rare earths within them) equal in weight to 47 Eiffel towers.10

As for 5G’s greenhouse gas emissions (based on the current energy mix and amount of greenhouse gases emitted when producing electricity), mobile networks alone would generate an additional 540 megatons of CO2.11 Wired and Wi-Fi networks would emit about the same amount. Data centres generate even more GHGs. Overall, within 10 years, ICT would add an annual GHG total of 1600 megatons. (The aviation industry emitted 900 Mt in 2018.) If we are lucky to meet strict 2030 objectives12 to reduce carbon emissions when producing electricity, we would still emit 840 megatons.

This is quite a significant amount of greenhouse gases.

Whose turn to pay the bill?

Let’s get simple: Who will pay for the new power plants that will feed 5G-era networks and data centres? Who will pay the energy bills? Will consumers who are perfectly happy with 4G pay for 5G’s energy bill? It would be very naïve to expect infrastructure manufacturers or operators to absorb 5G’s huge energy costs and not charge end-users.

I also can’t figure out why the industry would want 5G public networks. Private networks would provide security.

Last, how can we allow large-scale 5G deployments when so many nations have committed to reducing greenhouse gas emissions dramatically? How can EU and US policies ignore the rebound effect of deploying 5G? Why would our policies blindly support the telecom industry’s agenda and ignore that 5G’s deployment increases energy and resource consumption?